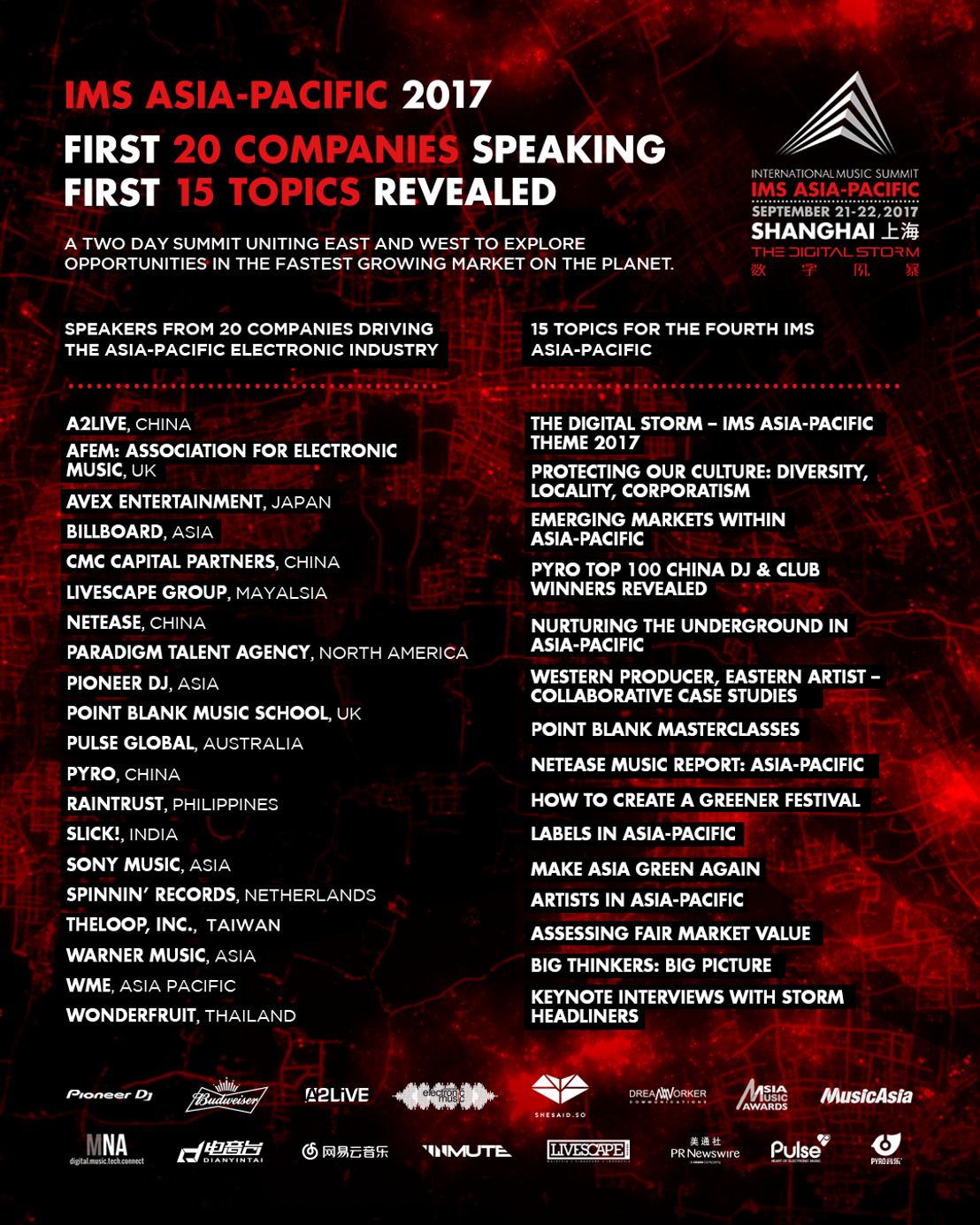 These visionaries will discuss hot-button issues that affect the community at large and Asia-Pacific, tackling topics like the preservation of dance music culture, diversity, locality and corporatism, emerging markets within the region, nurturing the underground in a very commercial region, creating a greener music festival, assessing fair market value in the dance music space, and looking at the big picture of the dance music industry in Asia. Attendees will also get the first look at the NetEase Music Report: Asia Pacific, attend Point Blank Music School Masterclasses, and hear the winners of the Pyro Top 100 China DJ & Club Winners.

“The potential of streaming and the Digital Storm in Asia is phenomenal, and the electronic music industry needs to be ready to embrace the opportunity,” says IMS co-founder Ben Turner. “However, right now, it’s a mainstream music market and IMS hopes to help redress the balance by helping the region support a full eco-system like we enjoy in other parts of the world. These are also testing times in the live market and best practices at events in Asia remain a huge concern. As always, there is plenty to debate at IMS Asia-Pacific.”

Last year IMS Asia-Pacific hosted two of the world’s biggest artists Skrillex and Alesso, as well as Pete Tong, representatives from CAA, AM Only and WME, Universal Music and Sony Music, for a wide-ranging series of discussions about the Asian market. Boiler Room also returned to the city of Shanghai with a special debut from Skrillex, which was one of the most viewed and highest streamed Boiler Rooms ever.

In 2015 IMS revealed that electronic music event attendance in China had risen 30% since 2011. The region is filled with a growing population of young, eager fans, hopeful talent and hungry professionals aiming to help cultivate the electronic music scene in the region and in China, the world’s biggest potential market for electronic music. 2017’s IMS Asia-Pacific will bridge the gap between East and West and provide unique firsthand insight into the artists, businesses and events that are making Asia-Pacific one of the most exciting and rapidly growing electronic music markets in the world.

Budweiser STORM Festival, produced by A2LiVE, has become China’s premier electronic music event since its launch in 2013. In addition to its flagship Shanghai event STORM now hosts 9 regional events around China and in 2017 will be the first Chinese electronic music event to host an event outside China, with shows in Australia. STORM’s attendance in 2017 is expected to surpass 200,000 and they have hosted some of the world’s biggest DJs including Kaskade, Galantis, Skrillex and more. Earlier this year A2LiVE Festival announced the launch of STORM Records! a Chinese focused electronic music label with European powerhouse label, Spinnin’ Records.

NURTURING THE UNDERGROUND IN ASIA-PACIFIC

HOW TO CREATE A GREENER FESTIVAL

Venue:Hyatt on the Bund, No.199 Huang Pu Road, Shanghai, China

International Music Summit (IMS) is an educational, inspirational and motivational thought leadership platform dedicated to creating awareness of, and appreciation for, electronic music, the artistry related to DJing and all related popular art forms, primarily through the presentation of summits and events that celebrate the historic and ongoing contribution of the genre to art and culture worldwide. IMS hosts major events annually in Ibiza and China. IMS was created by Ben Turner, Danny Whittle, Mark Netto, Simeon Friend and BBC Radio 1 broadcaster Pete Tong.

A2LiVE is a live entertainment company based in Shanghai, and is the premier guiding force of the live electronic music industry in China today.  Its mission is to become the leading vertically integrated electronic music platform in Asia, bringing the biggest and best destination electronic music experiences, music, video, news, and culture.