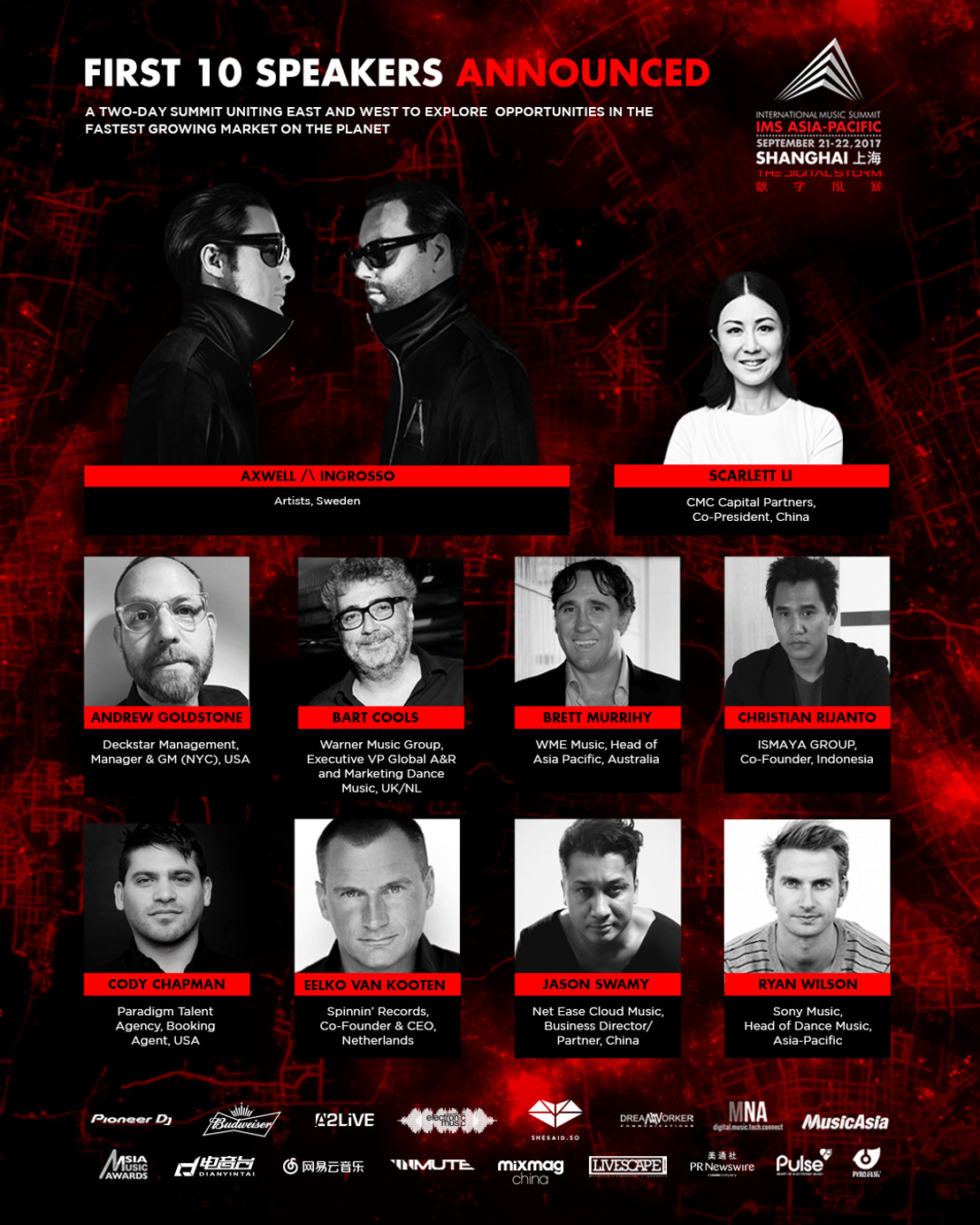 These visionaries will discuss some of the most pressing issues that affect electronic music both globally and locally in Asia-Pacific, exploring topics including the preservation of dance music culture, diversity, locality and corporatism, emerging markets within the region, promoting sustainability and Green issues, assessing fair market value within the genre and looking at the big picture of the industry in Asia.

In addition to interrogating these crucial topics, attendees will also get the first look at the Net Ease Music Report: Asia-Pacific, hear the winners of the Pyro Top 100 China DJ & Club winners and have the opportunity to participate in Point Blank Music School Masterclasses in electronic music production and DJing skills.

"The Asia-Pacific region offers some of the biggest opportunities to the electronic music industry, yet is largely unknown for most who live and work outside of it” says IMS co-founder Pete Tong. “ We believe IMS Asia-Pacific is key to opening the doors to this growing market and we are delighted to host some of the most influential decision makers in the region as our first speakers, alongside their global counterparts.  Our goal for IMS Asia-Pacific is to bring industry leaders from East and West together to build a dialogue, create connections, develop understanding and grow opportunities in a territory that hosts more than 60% of the world’s population."

In 2015 IMS revealed that electronic music event attendance in China had risen 30% since 2011. The region is filled with a growing population of young, eager fans, hopeful talent and hungry professionals aiming to help cultivate the electronic music scene in the region and in China, the world’s biggest potential market for electronic music. 2017’s IMS Asia-Pacific will bridge the gap between East and West and provide unique firsthand insight into the artists, businesses and events that are making Asia Pacific one of the most exciting and rapidly growing electronic music markets in the world.

Budweiser STORM Festival, produced by A2LiVE, has become China’s premier electronic music event since its launch in 2013. In addition to its flagship Shanghai event STORM now hosts 9 regional events around China and in 2017 will be the first Chinese electronic music event to host an event outside China, with shows in Australia. STORM’s attendance in 2017 is expected to surpass 280,000 and they have hosted some of the world’s biggest DJs including Kaskade, Galantis, Skrillex and more. Earlier this year A2LiVE Festival announced the launch of STORM Records! a Chinese focused electronic music label with European powerhouse label, Spinnin’ Records.

International Music Summit (IMS) is an educational, inspirational and motivational thought leadership platform dedicated to creating awareness of, and appreciation for, electronic music, the artistry related to DJing and all related popular art forms, primarily through the presentation of summits and events that celebrate the historic and ongoing contribution of the genre to art and culture worldwide. IMS hosts major events annually in Ibiza, Los Angeles and China.

A2LiVE is a live entertainment company based in Shanghai, and is the premier guiding force of the live electronic music industry in China today. Its mission is to become the leading vertically integrated electronic music platform in Asia, bringing the biggest and best destination electronic music experiences, music, video, news, and culture.